In a March 2, 2018 opinion, the North Carolina Supreme Court held, in North Carolina Department of Transportation v. Mission Battleground Park Leaseco, LLC et. al., that a real estate broker may be able to testify as to the fair market “value” and would not be excluded from providing testimony merely because he did not limit himself to providing an opinion of “price.” This is the Supreme Court’s first treatment of The North Carolina Real Estate Commission’s Broker Price Opinion statute, found at North Carolina General Statute § 93A-83 (f), which states that a “broker price opinion or comparative market analysis that estimates the value of or worth a parcel of or interest in real estate rather than sales or leasing price shall be deemed to be an appraisal and may not be prepared by a licensed broker under the authority of this Article, but may only be prepared by a duly licensed or certified appraiser, and shall meet the regulations adopted by the North Carolina Appraisal Board.”  (Emphasis added.)

In March 2013, the North Carolina Department of Transportation (NCDOT) condemned 2.193 acres of land in Greensboro for a highway construction project. The land being condemned had previously been part of a 240-unit apartment complex known as Landmark at Battleground Park. The defendants in Mission Battleground are the current and former owners, the lessee, and the mortgage holder of the apartment complex. NCDOT deposited $276,000 as just compensation in its Declaration of Taking and Notice of Deposit. However, the defendants disagreed with that amount and demanded a trial in Guilford County Superior Court to determine the proper amount to constitute just compensation.

In an effort to show that the land was worth more than $276,000, the defendants wanted to introduce a licensed real estate broker as an expert witness. The broker had prepared a written report in which he opined that the fair market value of the property being taken by NCDOT was $3.734 million, a figure was substantially higher than NCDOT’s initial offering of $276,000.

NCDOT filed a motion to exclude the broker’s opinion of value from evidence and to prevent him from testifying. The NCDOT prevailed on that motion and the broker’s expert report and expert testimony about the fair market value of the land in question were not allowed to be presented as evidence in the case. The trial continued on without the testimony of the broker relating to the fair market value of the property and, after hearing other expert testimony, the jury ultimately increased the figure for just compensation from $276,000 to $350,000. Still nowhere close to the $3.734 million cited earlier. 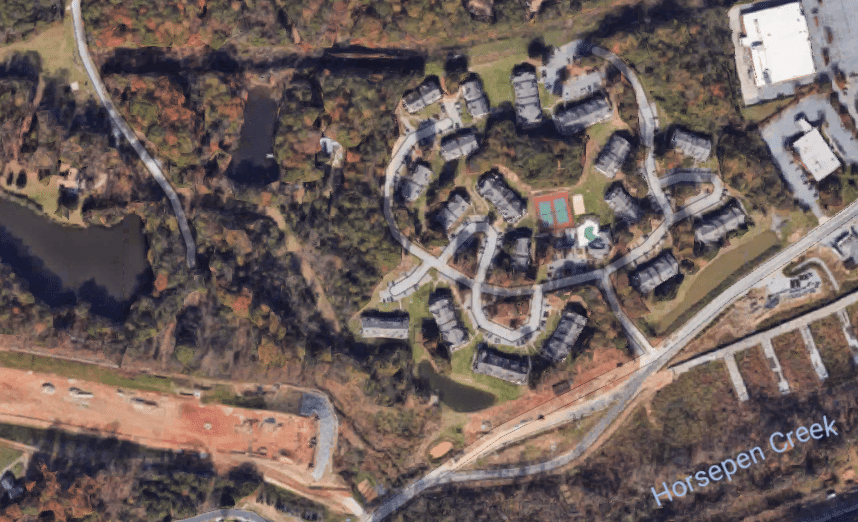 Aerial view of the Landmark at Battleground Park apartment complex. Note the highway construction present in the lower left hand corner of the image.

The North Carolina Supreme Court reversed the appellate court’s ruling, holding that the broker’s expert report and testimony should have been admitted into evidence during the trial. NCDOT argued that the broker’s testimony should have been kept out based upon NCGS §93A-83, the Real Estate Commission’s statute governing the practice of providing broker price opinions and comparative market analyses. NCDOT asserted that N.C.G.S § 93A-83 established a clear bifurcation between real estate brokers on the one hand and appraisers on the other. The statute states that brokers may only provide opinions of “probable selling or leasing price” while only certified appraisers may give estimates of the fair market value of real property. Essentially, NCDOT argued that the broker cannot legally prepare an expert report providing a fair market value of a property based on N.C.G.S § 93A-83, so, in turn, the broker cannot give testimony about something he may not lawfully prepare. NCDOT had prevailed on this theory at the trial court and appeals court levels.

However, the North Carolina Supreme Court took a fresh look at the dispute, noted the phrase “under the authority of this Article” and stated that the authority relating to who can provide expert testimony does not come from N.C.G.S § 93A-83. Rather, that authority comes from Rule 702 in the Rules of Evidence. In effect, the court clarified the limitations of N.C.G.S § 93A-83 by saying that it only controls in the context of giving the authority to prepare broker price opinions or comparative market analyses and to collect fees in exchange. As such, it prohibits brokers from preparing a fair market value report and charging a fee for that service. However, N.C.G.S § 93A-83 does not govern the authority of a broker or anyone else to give expert testimony in court with respect to the fair market value of a property. Instead, the Rules of Evidence provide the authority controlling what comes into court as evidence and therefore should guide the analysis in this case rather than N.C.G.S § 93A-83.

The North Carolina Supreme Court declined to conduct the full admissibility analysis based on Rule 702 and took no position on the specific question of whether the testimony of the broker should have been admissible. Instead, the court remanded the case to the trial court for a new trial along with instructions to make the admissibility determination of the broker’s testimony (or that of any other expert witness) based on Rule 702 rather than N.C.G.S § 93A-83.

Notably, the North Carolina Appraisers Act in 93E-1-3 (f)(3) has for nearly 25 years provided an exception to licensure as an appraiser for “[a]ny person to qualify as an expert witness for court or administrative agency testimony, if otherwise qualified.” Simply put, any person can qualify as an expert witness if qualified by the trier of fact. While licensure may be a factor, it is not dispositive.

This opinion has confirmed the Appraisal Board’s exemption from licensure for expert witnesses and protected the wide pool of potential experts who may give testimony in court about the fair market value of a property, as long as they meet the requirements of Rule 702. Any lay person who meets the standard for an expert witness laid out in Rule 702 may be allowed to deliver expert testimony in court with respect to the fair market value of a property. This opinion is no groundbreaking decision, but merely the Court’s first time considering and confirming the Appraisal Board’s licensure exemption statute enacted 25 years ago. It seems that in 1993, the forward-thinking Appraisal Board statue (93E-1-3) contemplated the future interaction of the existing Rule 702 and the yet-to-be-drafted 2012 Real Estate Commission statute governing BPOs (93A-83.)

Got a question? We're here to help. Get In Touch

Got a question? We're here to help.
Get In Touch